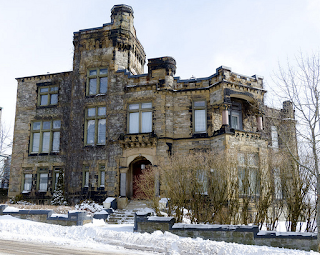 For about the cost of a nice condominium in Toronto or Vancouver you can have a castle that once hosted royalty in downtown Saint John. Canada's first prime minister attended the official opening of the home.  Caverhill Hall has been for sale for some time, with a current asking price of less than $469,000.  The details of the real estate listing, by DeCourcey and Company give some hint of the grand history of this historic property. Built in the period 1879-1884 the structure is made of local limestone and granite pillars.  It is located in central Saint John at 134 Sydney St.

The house is grand by any measure. It has a 29 foot long dining room, and a 35 foot long living room as well as a library.  Deep in the heart of Saint John, the Bay of Fundy is visible from the master bedroom.  Even though the house has gone through a number of uses over the years, it has remained largely true to its historical origins. This image below of the dining area gives a sense of the inside of the house which includes many decorative wall and ceiling covers, and extensive use of stained glass. 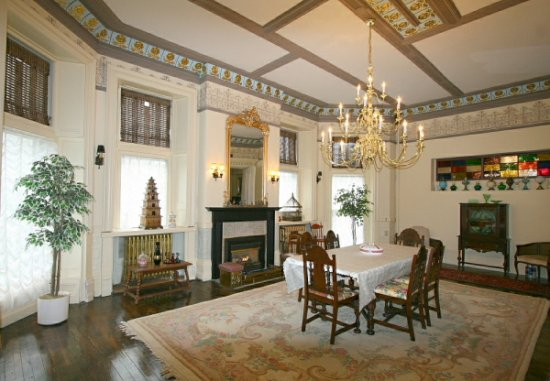 The former servant quarters are now separate apartments, and for the past number of years it has served as a private residence along with rental apartments.  It has also, at various times, served as a military headquarters, an officer's club, and a night club.

There are several histories of the property online.  It was built, some accounts starting in 1879 (other accounts say 1881), for Mr. Simeon Jones.  His original house had been burnt to the ground in the the Great Fire of 1877.  The house was based on a similar structure in Montreal, and the architect for that house was hired to consult on this property. Mr. Jones at first worked in the brewery business eventually becoming an owner (in 2010 a Maritime beer was named in his honour).  He (with associates) started a bank in 1874, and his three sons took over the brewery business in 1879.  He was elected as an alderman in 1879 and subsequently became the mayor of Saint John.

While a number of public buildings constructed in that era used limestone, it was relatively rare in New Brunswick in private homes.  The integration of polished granite with the limestone, on short exterior pillars, and several places on the entrance (shown below) add significantly to the architectural feel. 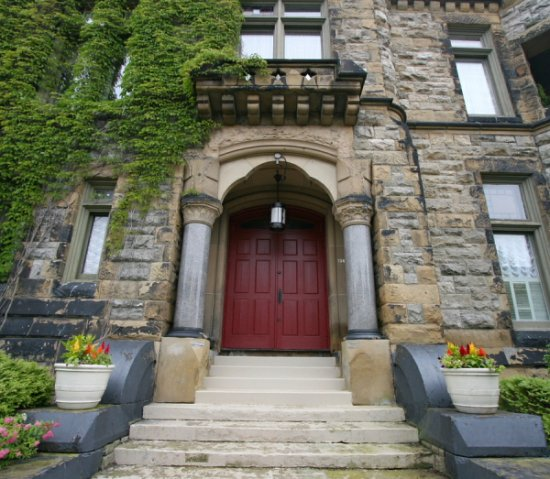 There are conflicting reports (some attribute it to the name of a daughter in law) of the naming of the hall, but the most definitive accounts attribute it to Simeon Jones grandmother Jane Elizabeth Caverhill.  Caverhill Hall is listed in the Saint John Tourism Walking Tours Guide available on the web. Part of the account written there says "Caverhill Hall in its heyday hosted a King, a Queen and a Prime Minister. It was built by a brewer, Simeon Jones and took its name from his grandmother, Jane Elizabeth Caverhill... Simeon Jones was mayor of Saint John throughout the construction period. Upon its completion, the Jones’ hosted a reception for Sir. John A. and Lady MacDonald and 250 guests. In 1901, the Duke and Duchess of York, who became KingGeorge V and Queen Mary, used the house."  As noted the house was loaned for use by the Prince of Wales and the Duke and Duchess of Cornwall and York during their October 1901visit to Saint John. The house was re-decorated in grand style in the months leading up to this royal visit, and this event was widely reported in local and national media. A reprinting of a book about the royal tour is available on Amazon.

While a number of grand properties with interesting histories are for sale in Atlantic Canada currently,  this could arguably claim to be the finest private home on the market.

Photo credits:  The opening photo is from the current real estate listing for the property by DeCourcey and Company.  The other two  photos are modified forms of several provided on an archived site about Caverhill by Katherine Bacon, Fine Home Specialist.

The text of this article is ©R.L. Hawkes, 2012.  To seek publication permission, or to inquire about custom writing,  please contact rhawkes@chignecto.ca.

Information on tax assessment and last sale price for properties in the Province of New Brunswick are freely available online through Service New Brunswick.  This is one source of useful information if you are considering selling or buying a home in the province, or if you are wondering if your tax assessment seems fair compared to others in your area. In this blog posting I will take you through the steps in looking up the information. 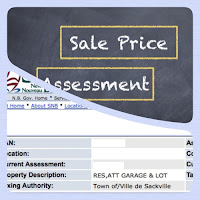 In order to do the search you will either need the property account number (PAN), the parcel identifier number (PID) or the civic address.  If you want to search on your own property you can get the PAN and PID from your tax bill, but if searching for comparison properties you will probably be doing it by the civic address, so I outline that approach.

First go to the Service New Brunswick website, and then from the most requested links on the right select "Property Assessment".  From the subsequent page choose "Assessment comparisons and sale prices."  From there select the Search Now button. Now the link may well change, but as of this writing you can go directly to the search with this link.

You will select "Search by Location".  Now from there you will need to enter three pieces of information, a Taxing Authority, Civic Number and Street Name.  While the Taxing Authority does have a drop down list, the length and order makes it challenging to find the location that you want.  For convenience I have given the Taxing Authority numbers for some of the locations covered by this blog (L.S.D. is the local service district).
While if you know the exact address you can enter all information, it turns out that you can leave the street number blank, and just enter the taxing authority and the street name.  If you do that you will get a listing of all of the properties on a street, which is handy when seeking comparison properties on your street. Note that they are arranged by first number, so for example 1, 107 and 11 would be close together and before 2 or 23.

Once you find a property you want to look up click on its PAN number and you will get a listing like the one shown (except I have whited out the information that would identify the property). The Location will give you the street number, and the Property Description will indicate for example if it is a house and land with associated garage.  The current assessment gives the assessed value for tax purposes.  Note that this is not always closely linked to selling values (which are often somewhat higher in many regions of New Brunswick).  The current tax levy for the year shown gives the actual taxes prior to any reductions for status.

Below that, if the property has sold since the period when listings went online in New Brunswick, then the selling price and date of sale will be indicated.   This can be very valuable when seeking comparisons to help you in deciding an appropriate price for your house (or to see if an asking price is reasonable on a house that you are planning to offer to purchase).  Of course it is always wise to seek professional advice, and we will cover the differences between house appraisals (done by registered appraisers) and comparitive market analysis (done by local real estate agents) in a future post. Also when using the information from Service New Brunswick keep in mind that a house that has not sold for a long period may not be assessed equitably with one that has a more recent sale history.  Other factors may also come into play. Service New Brunswick has a page of frequently asked questions with respect to property assessment.
Posted by Dr. Robert Hawkes at 5:39 AM 3 comments: 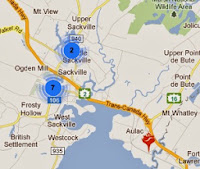 Whether on vacation or close to home, it is rewarding to research and visit historical properties in your area.  Fortunately, due to the hard work of dedicated community volunteers, professional historians, and those in government there are great resources to do this in your community.  A good starting place is to the Canada's Historic Places website.  To start your search use the Search tab at the top of the page, and then on the subsequent page just enter a province and town/city on the right and press the search button (there are other options including type of building/activity or entering the first three characters of the Canadian postal code, for example).  For Sackville, NB when I searched on Jan. 2, 2012 this generated a listing of 51 places.  Each has a link with detailed information.  When you click on an item in the list a red icon will appear on the map (e.g. in the accompanying image I selected Tonge's Island National Historic site. A useful book, available as a free pdf written by Environment Canada Parks Service, is The Buildings of Canada.  This provides sketches of different architectural styles for houses, churches, barns and more, and will help you to spot historically important structures not yet in the website (coverage across the country is quite variable). The good folks at the Tantramar Heritage Trust have made the job even easier for those in the Sackville, NB area.  From their website a selection of Tantramar Historic Sites will show them on a map, along with images and detailed descriptions of each.  One feature I particularly like is that they provide a list that is divided by century, which makes it easy, for example, to find 19th century architecture.  While a number of the entries are naturally enough historic locations, churches and institutional buildings, and commercial buildings, there are a large number of residential homes in the list as well.  In the next posting of this blog I will tell you about a historic Sackville house that is for sale right now.
Posted by Dr. Robert Hawkes at 2:00 AM No comments:

Search this blog and linked material...

It Happened in NB

Future columns we are working on...

Dr. Robert Hawkes
Following a career as a researcher and award-winning teacher and communicator, I now concentrate on writing, outreach, investing, volunteering and Canadian travel. Author of books, articles and scholarly papers.